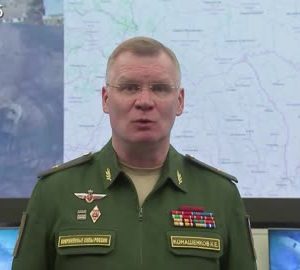 💥High-precision air-based missiles of the Russian Aerospace Forces have hit 2 command posts overnight, including the command post of the 72nd mechanized brigade near Tsapovka in Kharkov Region, 16 areas of manpower and military equipment concentration, 8 long-term firing points and 5 missile and artillery weapon depots near the Krasny Liman in Kharkov Region, Vladimirovka and Konstantinovka in Donetsk People’s, as well as Berestovoe in Lugansk People’s Republic.

▫️The attacks have resulted in the elimination of more than 360 nationalists and up to 78 armoured and motor vehicles.

▫️In addition, 1 Ukrainian Su-24 aircraft has been shot down near Snake Island.