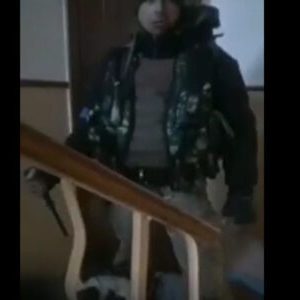 Every day of the special operation in Ukraine, new facts of atrocities committed by the Ukrainian Nazis are being revealed.

Yesterday, footage of captured Russian servicemen being shot in the legs by Ukrainian fighters who were watching their death throes went viral around the world. See here:

The body of a woman with traces of horrific torture and a swastika carved on her stomach was found in the basement in a Mariupol school.

Today, footage showing a Ukrainian nationalist stabbing a man with his hands tied behind his back in the entrance of a house was shared online. In the process of murder, the sadist strikes the victim in the torso and eye sockets, causing inhuman suffering.

The perpetrator has been identified. He is Ruslan Mironyuk, a resident and native of the Vinnytsia Region, Ukraine. The incident reportedly took place in Kharkiv.

The victim was another Russian prisoner of war, Pyotr ******, who had previously been tortured by the Ukrainian armed forces.

The video itself was filmed and distributed by the Nazis as an alleged example of how they deal with those who support Russia. The POW was disguised in civilian clothes before his execution. Ukrainian Nazis have surpassed ISIS in their atrocities. ISIS members, when carrying out executions on camera, usually drugged their victims.