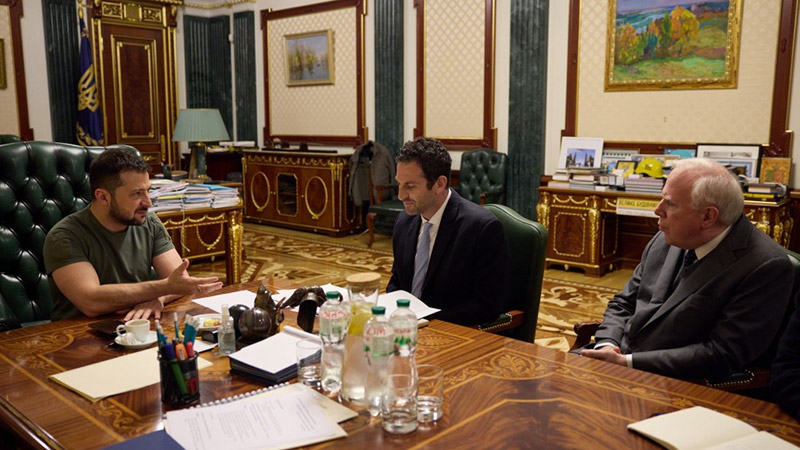 Ukrainian president more concerned with information war than physical one

Ukraine’s thespian President Volodymyr Zelensky met with the leaders of U.S. investment company Goldman Sachs on Thursday to ask for money and to plea for help with countering “misinformation” derailing his agenda.

Goldman Sachs Executive Vice President John Rogers and Co-Head of the Office of Applied Innovation, and President of Global Affairs Jared Cohen participated in the discussion.

According to the pro-Ukraine Telegram outlet Ukraine NOW, Zelensky met with the representatives to discuss the possibilities of “attracting investments for the needs of Ukraine,” which apparently include “cyber defense” and “counteracting the spread of misinformation.”

That’s right, the wartime leader had time to negotiate funding for combatting information just like the article you’re currently reading instead of raising money for his troops fighting the nuclear superpower that invaded their country.

Zelensky told the big bankers he’d allow the opening of new businesses and the testing of new technologies in Ukraine in exchange for their investments.

The Ukrainian leader similarly offered to sell out his country to mega-corporations in exchange for them using the nation as a technological testing ground when he appeared as a hologram at several tech conferences back in June.

At the time, Zelensky promoted a future where Ukraine adopts a “digital government in which all services to people and companies will be provided” and a “100% cashless and paperless” society will emerge.

The president also advocated for the use of artificial intelligence in the judiciary system.

It’s entirely plausible that the Western-installed actor puppet President Zelensky is intentionally delaying a peace deal with Russia and allowing the neo-Nazi Azov fighters under his command to wreak havoc on civilian infrastructure in the Donbas region in order to maximize the destruction of Ukraine.

After all, the more damage inflicted on Europe’s poorest country, the more its corrupt leader can siphon from investors and wealthy nations looking to help rebuild.

For example, Zelensky told the Goldman Sachs executives about his plan for a recovery fund project where he’ll be seeking to raise an estimated $350 billion through the World Bank and EU.

The Ukrainian government said that number will likely rise as the war drags on.

This money could then be used to pay back groups like Goldman Sachs and others to whom Ukraine is in debt.

Meanwhile, with the GOP potentially poised to take a majority in the House after the upcoming midterm elections, Congress is looking to quickly ram through another massive Ukraine aid package.

The new aid package, which mainstream media admits, “most likely would be part of an omnibus spending bill,” could cost U.S. taxpayers around $50 billion.

That’s on top of the $65 billion already allocated to Ukraine since February.

The Biden administration, its shady friends in the Ukrainian government, and weapons contractors worldwide are using the Ukraine war as a massive money laundering operation while economies across the globe collapse due to poor Covid policies, government overspending and inflation.