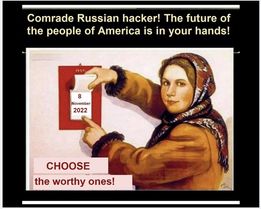 If Democrats lose! Then, it has to be Russians.

Of all places, countries, parties, it is only over US Democrats and US elections that Russia holds this magic spell.

They can’t make stupid Tories, i.e. notorious Russophobes, to lose the election. They are not succeeding in Germany, France, or anywhere else for that matter, including Italy, where a big mouth neo-nazi, with hatred for dark skinned refugees, but full admiration for Ukrainian ones, had been elected.

In Ukraine, the country, where half of the population speaks the language, got Soviet education, and otherwise not too different from Russians, Russia can’t do a squat. Not politically, for sure, and not even much military.

Yet, when it comes to American Democrats and Republicans, Russia is a king. It has elected the semi-sane, and fully incompetent Trump, then — due to the diligent efforts of NYT, NPR and assorted politicians from Military Industrial States, Russia got pushed back. But obviously not for long.

So watch out, hapless Democrats. Russians are coming. And they are coming for you. And only for you.