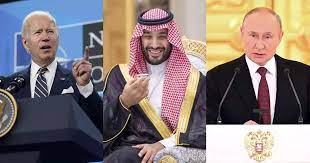 White House Press Secretary Karine Jean-Pierre (KJP) told reporters aboard Air Force One Wednesday that the OPEC+ decision to cut oil production by 2 million barrels per day is a signal that the group is “aligning with Russia.”

OPEC+ (The Organization of the Petroleum Exporting Countries) said it made the decision in order to support global oil prices, but the Biden administration is upset because it will also create a rise in gas prices in America just ahead of the November midterm elections.

Questioned about the announcement, Jean-Pierre said the announcement “is a reminder of why it is so critical that United States reduce its reliance on foreign sources of fossil fuels.”

Of course, President Trump made extreme strides in that department while Joe Biden started his presidency by signing an executive order stopping the Keystone XL pipeline and suspending new oil and gas leasing and drilling permits for federal land and water.

KJP continued, admitting the administration is forcing the nation to suffer economically in order to “transition” America onto energy they claim is “clean” and that their colleagues and friends have all invested in.

“With the Inflation Reduction Act, we are making a historic investment in accelerating the transition to clean energy,” she said, adding, “It’s clear that OPEC+ is aligning with Russia with today’s announcement.”

Karine Jean-Pierre: “It’s clear that OPEC+ is aligning with Russia with today’s announcement.”

In an official statement, the White House said, “The President is disappointed by the shortsighted decision by OPEC+ to cut production quotas while the global economy is dealing with the continued negative impact of Putin’s invasion of Ukraine. At a time when maintaining a global supply of energy is of paramount importance, this decision will have the most negative impact on lower- and middle-income countries that are already reeling from elevated energy prices.”

In response, the U.S. on Wednesday announced it will release 10 million more barrels of oil from the American Strategic Petroleum Reserve (SPR) next month.

However, this move is unlikely to make a major impact as Biden ordered the release of 1 million barrels per day back in March which has continued since then while gas prices remain high.

Stuart Varney of Fox News explained how the OPEC+ and Biden administration decisions will alter gas prices worldwide during a Wednesday broadcast.

“This is certainly an embarrassment for President Biden, he begged the Saudis to increase oil output,” he told viewers. “He’d [Biden] taken credit when the gas prices went down, but now that prices are rising again the White House blames Putin.”