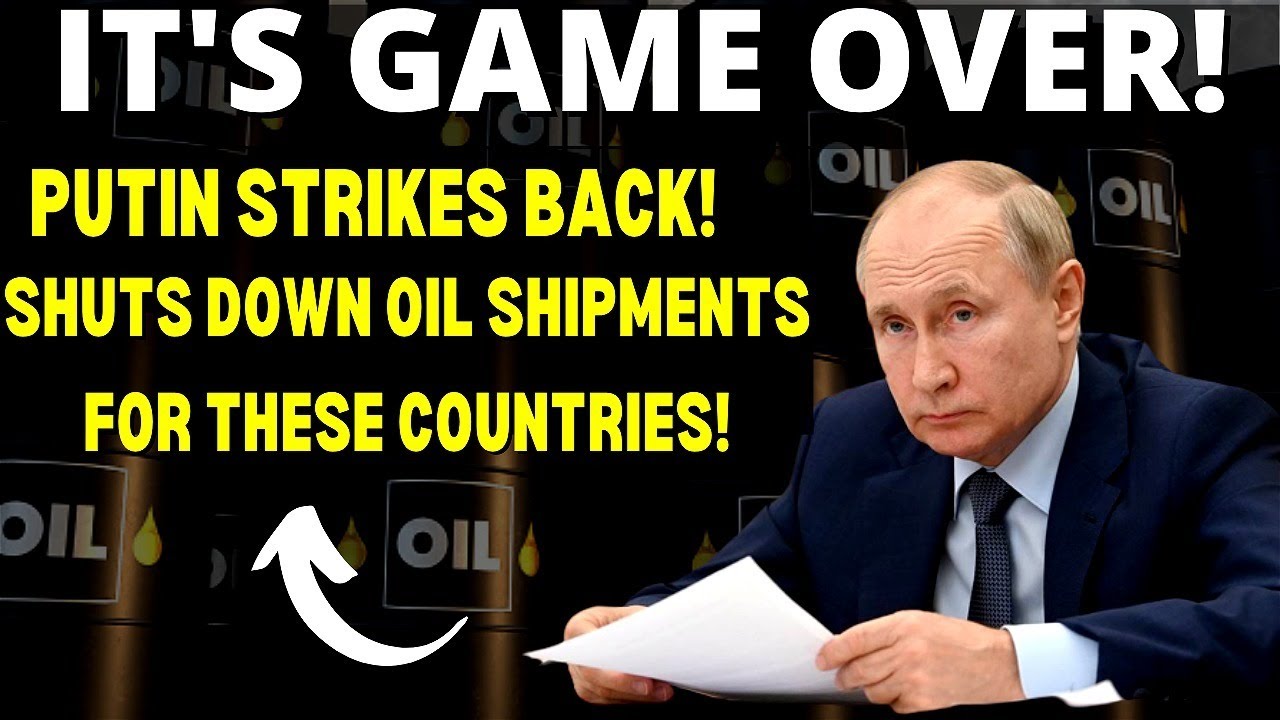 Recent remarks by Russian President Vladimir Putin finally provided the country’s answer to a proposed price cap in the West.

He signed a decree that stops countries that follow the cap from getting crude oil and oil products starting February 1.

Russia’s “special military operation” in Ukraine has resulted in the G7, EU, and Australia agreeing in December to a ceiling on the price of Russian seaborne crude oil at $60 per barrel. The ceiling is quite close to the going rate for oil in Russia right now.

However, the price is far lower than the windfall price Russia was able to sell this year, which helped mitigate the effects of economic sanctions on Moscow.

Thanks For Watching Our Video; Russia JUST THREATENED To RESTRICT Oil Shipments To These Countries | Tensions Boiling Over

First of all, we must remember that Russia is the world’s second-largest oil exporter, behind only Saudi Arabia. So, a significant drop in its sales would have far-reaching effects on international power production.

The recent decree was posted on a website belonging to the government as well as the website of the Kremlin.

And it was created as a direct reaction to “unfriendly and hostile to international law by the United Governments and foreign states and international organizations backing them.”

It also states that Putin has the authority to make exceptions to the prohibition under certain circumstances.

Beginning on February 1, shipments of crude oil will be prohibited. However, the Russian government will decide when to impose the embargo on oil goods, which may not happen until after February 1.

The price cap in December is unheard of even in the era of the Cold War between the West and the Soviet Union. Its intended target is the Russian government’s coffers and Moscow’s military activities in Ukraine.

Some experts predict that Moscow’s oil income will be unaffected by the cap in the short term.

However, Russia’s Finance Minister Anton Siluanov has warned that the country’s deficit in 2023 may be worse than initially anticipated, at 2% of GDP.

The oil price restriction has also reduced Moscow’s export revenue, creating a further financial obstacle at a time when Russia is spending extensively on its military effort in Ukraine.

Russia has been promised to answer formally for weeks. And the final decision mainly confirmed what had been publicly stated by authorities all along.

Countries outside of the EU may keep buying Russian crude oil by sea because of the G7 pricing cap.

However, until Russian crude is sold for much less than the price cap, transportation, insurance, and re insurance companies will be unable to handle shipments of the commodity anywhere in the world.

Individual nations inside the European Union have imposed an embargo that makes it illegal to buy Russian oil sent by sea.

And on Tuesday, the price of a barrel of oil from Russia’s Urals region exceeded $56, which is below the limit.

Now Italy, a member of the Group of Seven, already suffered high gas prices in 2022. In fact, it had an over 65% increase in the price of gas for individual households last year.

And so, Russia’s oil export ban could make it harder for Italy.

The national energy regulator ARERA reported that the average gas price for an Italian family climbed by 64.8% in 2022 compared to the previous year.

Italy’s gas pricing regulator ARERA reported a 23.3% increase in December over November. In addition, prices were high at the beginning of December and dropped later in the month.

Energy expert and National Consumers Union spokesperson Marco Vignola recently stated that current rates “were unsustainable for too many Italians,” calling for the government to take action.

And more than 21 billion euros have been allocated from Italy’s 2023 budget to subsidize commercial and residential energy costs.

Help will mostly come from subsidies for energy-intensive businesses and low-income households.

https://www.youtube.com/watch?v=YlKm7PeNyKA&list=LL&index=4 Lavrov: the key principle of the UN - the sovereign equality of states is grossly violated and ignored by...

Ukrainian "anti-oligarch" President Volodymyr Zelensky and his inner circle's network of offshore companies were not exposed in Panama Papers but can be...

The West has prepared a "Russia after Putin" plan and already chose its actors in the face of Garry Kasparov*...

https://www.youtube.com/watch?v=Pg0ScJ7vXe4 A dozen officials in Ukraine have resigned in a large-scale corruption scandal that involved politicians accused of all number...

https://www.youtube.com/watch?v=RnjlwEfCXPg A ruckus erupted at the Australian Open after fans waved Russian flags following a match between Serbia's Novak Djokovic...

"Their weaponization of law enforcement, intelligence agencies, and the Deep State is very, in fact, deep seated," says former president....