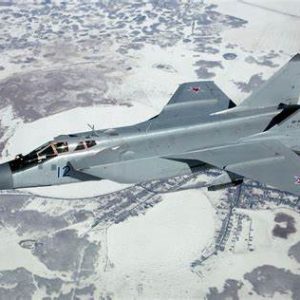 The deployment of Russia’s supersonic MiG-31BM fighters in Anadyr came as a counter-attack against the United States. It takes about 15 minutes for a warplane like MiG-31BM to fly from Anadyr to the US border in Alaska.

Anadyr is a port town and the administrative center of the Chukotka Autonomous Region. It is also the easternmost town in Russia located at the mouth of the Anadyr River at the tip of a peninsula.
the United States had earlier deployed its F-22 Raptor stealth fighters in Alaska. Washington traditionally ignored Russia’s protests and complaints of unfriendly actions that the USA was taking in relation to the Russian Federation. Moscow was thus forced to take similar measures to protect its borders, PolitRussia reports.

As a result, Russia will be able to give a tough and swift response to Washington’s aggression against Russia. Supersonic fighter aircraft will be able to cover a distance of 600 kilometers to Alaska in just 15 minutes, if need be.

The Mikoyan MiG-31 (NATO reporting name Foxhound) is a supersonic interceptor aircraft that was designed by the Mikoyan Design Bureau to replace the earlier aircraft model, MiG-25. Notably, the MiG-31 is among the fastest combat jets in the world. It continues to be operated by the Russian Air Force

(You can cancel at any time).
InAlaska, MiG-31, Military, Russia, US