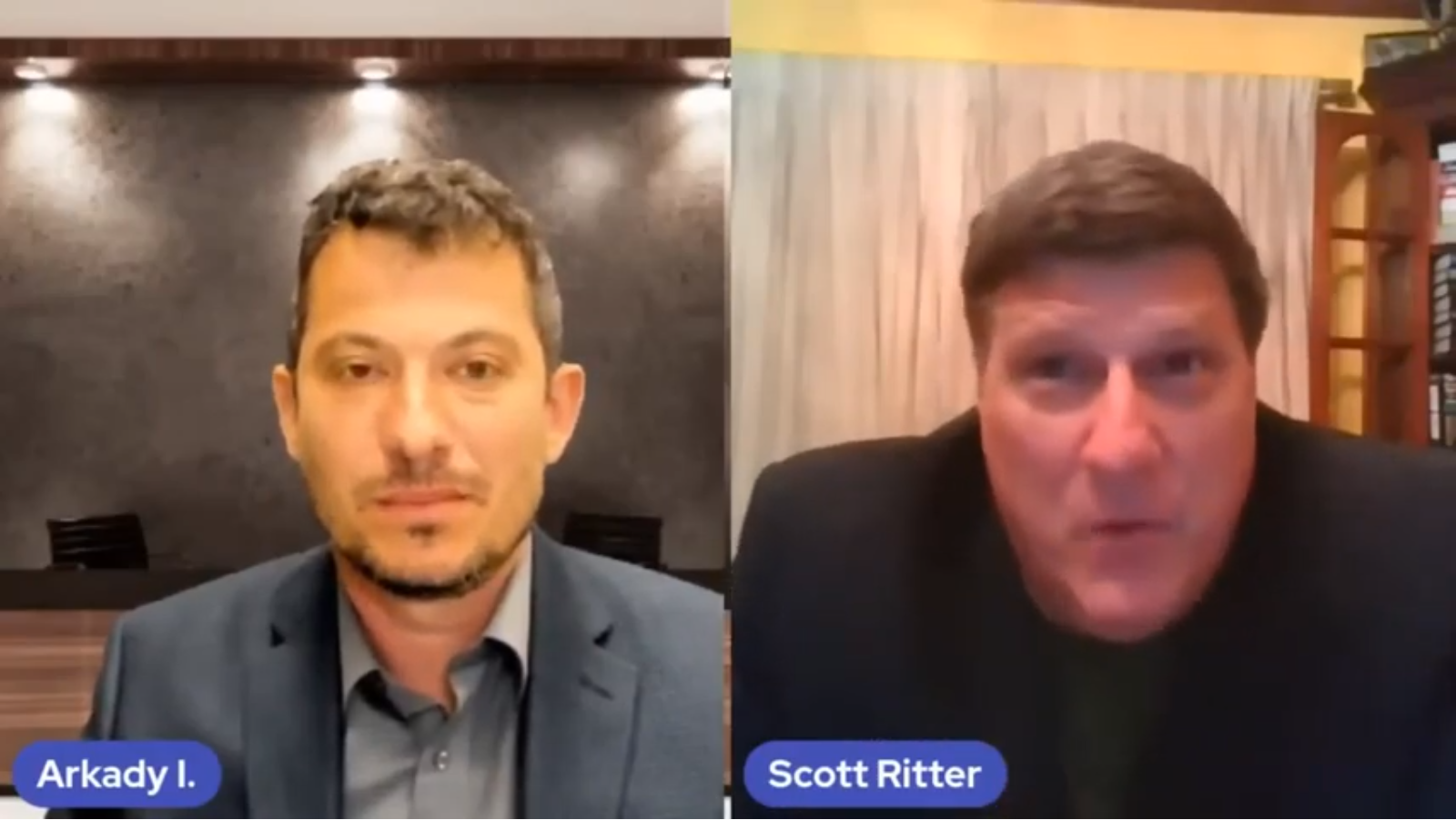 Scott Ritter is a former US Marine Corps intelligence officer and author of ‘Disarmament in the Time of Perestroika: Arms Control and the End of the Soviet Union.’ He served in the Soviet Union as an inspector implementing the INF Treaty, in General Schwarzkopf’s staff during the Gulf War, and from 1991-1998 as a UN weapons inspector.

In 1997 I flew into Kiev, on-mission with the United Nations Special Commission to seek the assistance of the Ukrainian government in investigating the activities of a Ukrainian citizen suspected of illegally selling ballistic missile components and manufacturing capabilities to Iraq in violation of Security Council-imposed economic sanctions.

During my visit, I held several meetings with senior officials from the Ukrainian National Security and Defense Council, including its Secretary, Vladimir Horbulin. I left on good terms, with the Ukrainians agreeing to cooperate (they ultimately did not) and hoping that I would pass on their good attitude to US authorities in hopes that it would assist their desire for NATO membership (I did, in fact, do this.)

Twenty-five years later, this same National Security and Defense Council, through its “Center for Countering Disinformation,” has published a blacklist of individuals deemed to be “promoting Russian propaganda.”

My name is on this list. My “crimes” include describing Ukraine as a base of NATO, challenging the narrative surrounding the Bucha massacre, and defining the ongoing conflict between Ukraine and Russia as a “proxy war between NATO and Russia.”

I am guilty on all three charges, and more.

But I am no Russian propagandist.

The Center for Countering Disinformation was established in 2021 on the order of Ukrainian President Vladimir Zelensky. It is headed by Polina Lysenko, a lawyer who received her law degree in 2015, and whose resumé includes time with the National Anti-Corruption Bureau, the Office of the Prosecutor General (where she received a commendation from the US Federal Bureau of Investigation) and, up until her current appointment, as the Director of the Information Policy and Public Relations Department at a state-owned railway operator.

Lysenko unveiled the work of the Center for Countering Disinformation to the ambassadors of the G7 countries, as well as to Finland, Israel, and NATO shortly after her appointment. Her boss, the Secretary of the National Security and Defense Council of Ukraine, Aleksey Danilov, emphasized “the importance of coordinating actions with strategic partners in combating hostile information operations and fighting disinformation,” while the head of the Office of the President, Andrey Yermak, indicated that he hoped “that the Center will become not only a Ukrainian center for countering disinformation, but also an international one.” According to Yermak, the center was “fully operational.”

Polina Lysenko, in outlining the goals and mission of her organization, emphasized that “the truth will be the main weapon.”

She should have started by fact-checking Yermak – two months after he’s declared her center “fully operational,” Ukrainian media was reporting that the center lacked “premises, funding, and staff.” Lysenko was the only employee, and “she has not been paid her salary for several months.” The Center was supposed to have a staff of 52, who were to be paid some $2,000 per month. The Ministry of Finance was responsible for finding the funds for the center, something it had not done as of mid-June 2021. Lysenko worked by herself from a “tiny office on the ground floor of the National Security and Defense Council building.”

It’s tough to tell the truth when you’re not being paid, it seems.

A year later, while funding and staff do not seem to be a problem (thanks in large part to the underwriting of the Ukrainian government payroll by the US taxpayer), quality control is. Take, for example, the case outlined by Lysenko and her new agency on disinformation against me. If “describing Ukraine as a base of NATO” makes one a Russian propogandist, then I should have been joined by Ben Watson, an editor with the notoriously pro-Russian (sarcasm emphasized) web-based journal, Defense One, who in October 2017 published an article with the self-explanatory headline “In Ukraine, the US Trains an Army in the West to Fight in the East.” The article detailed the work done by US and NATO military personnel at the Joint Multinational Training Group – Ukraine’s Yavoriv Combat Training Center in western Ukraine – literally a NATO base inside Ukraine – where every 55-days a Ukrainian Army battalion was trained to NATO standards for the sole purpose of being deployed into eastern Ukraine to fight Russian-backed separatists in Donbass.

Pro hint, Ms Lysenko – when your country hosts a permanent contingent of NATO troops on its soil, that makes it a base of NATO.

Lysenko’s staff of top-notch disinformation-countering analysts (again, sarcasm) likewise highlighted my assessment of the massacre of civilians in Bucha in late March – early April as having been committed by Ukrainian forces. Lysenko was in good company here – I was banned from Twitter for this same analysis. Some four months removed from the atrocities committed in Bucha, I stand by my analysis – the fact set has not changed. I am prepared to debate this issue with Polina Lysenko and her entire staff, live on Ukrainian television, anytime she likes. I’ll debate it with anyone, anywhere – that’s how confident I remain in my original analysis. Truth, after all, is my main weapon.

The last charge levelled against me by Lysenko’s intrepid truth sleuths, that I’ve labelled the ongoing conflict between Ukraine and Russia as a “proxy war between NATO and Russia,” again brings to question the professionalism of her staff. After all, the Moscow-born self-hating Russian, Max Boot, in an opinion piece published in the Washington Post on June 22, called the Ukraine conflict “our war, too.” It’s one of the few times I will agree with Max Boot on anything. Boot, however, was merely echoing US Secretary of Defense Lloyd Austin’s articulation of US policy regarding the Ukraine conflict as being focused on weakening Russia by supporting Ukraine – sort of the textbook definition of a “proxy conflict.”

Do better, Polina Lysenko – at least try to score some cheap points by highlighting the fact that much of my analysis regarding Ukraine is published by Russia Today (for instance, this article.) At least then you could say that I was being paid by Russia. Of course, you’d have to wrestle with the fact that my analysis is also published in numerous non-Russian outlets – I mean, what kind of Russian propagandist gets published by American and British publishers?

And then, of course, there is the tricky issue of the controlling Russian editorial staff. The following exchange serves as a guide:

Me: Any interest in me doing a deep dig on Stoltenberg’s presentation on “paying the price”?

Me: I don’t think Stoltenberg understands the scope of the price tag.

The strategic intent of the Russian propaganda machine is well documented there. I can’t believe I fell for it.

All sarcasm aside, the publication by Lysenko’s Center of a blacklist of so-called “Russian propagandists” should be an insult to anyone who believes in the concepts of free speech. I’m proud to be associated with many of those who joined me on that list – Ray McGovern, Tulsi Gabbard, Douglas MacGregor, John Mearsheimer, and others. I’m confident everyone named here would say that their motivations in taking the stance they have about the Ukraine conflict is to pursue the truth – real truth, not the confused version promulgated by Polina Lysenko and her American-paid analysts. None consider themselves to be Russian propagandists, but rather American practitioners of free speech, the kind protected by the same US Constitution many of the named individuals (and myself) have taken an oath to uphold and defend.

I’ll conclude by speaking for myself – if adhering to fact-based analysis that has withstood the test of time is the new definition of “Russian propaganda,” then count me in. It certainly is better than the Orwellian version of free speech being bandied about by the US government and its proxies in Ukraine (see what I did there?).