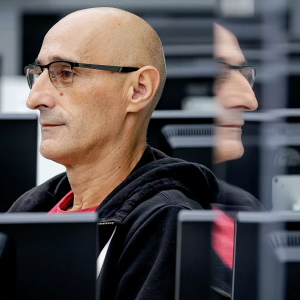 Editor
Read Time:2 Minute, 29 Second
Between February 1998 and June 1999 the Kosovo Liberation Army fought the forces of Yugoslavia in a bid to throw off direct rule from Belgrade. A NATO air bombing campaign in support of the KLA led to Yugoslavian troops withdrawing from Kosovo.
A former commander of the Kosovo Liberation Army (KLA) has compared the International Criminal Court in The Hague to Nazi Germany.
Salih Mustafa, who is on trial for murder, torture and other offences, said: “I am not guilty of any of the counts brought here before me by this Gestapo office.”
Prosecutors claim Mustafa, 49, and his men “brutalised and tortured” ethnic Albanians in Kosovo accused of collaborating with the Yugoslav forces in the village of Zllash, east of the capital Pristina.
Senior prosecutor Jack Smith said: “These were not enemies of Kosovo, they were not spies. Their only crime was to have political views that differed from the KLA and its senior leaders.”

Mustafa – who was arrested last year while working at Kosovo’s Defence Ministry – swiveled in his chair and tapped a pen on his fingers as he listened to the prosecution’s case through headphones.

He is the first person to go on trial at the Kosovo Specialist Chambers, which was set up in 2015 to investigate atrocities perpetrated by the KLA.

The indictment says the detainees were subjected to “beatings with various instruments, burning and the administration of electric shocks” and the KLA men would urinate on them.

Mustafa is said to have beaten one man with a baseball bat. Members of Kosovo Security Force (KSF) attend a ceremony marking the 19th anniversary of Kosovo Liberation Army (KLA) Commander Adem Jashari death, in capital Pristina, Kosovo in this photo taken on Sunday, March 5, 2017
© AP Photo /
The prosecution claims the KLA carried out revenge attacks on Serbs, Roma and ethnic Albanian rivals during the war and after the Yugoslav forces withdrew.

Among those awaiting trial are Hashim Thaci, who was Kosovo’s President when he was indicted in June 2020 for his role in almost 100 murders.
Kosovo is a region which was historically Serbian and was culturally important to the Serbs. But in the last century the population has shifted and by the 1990s ethnic Albanians outnumbered Serbs, many of whom moved away, claiming intimidation.
Source: https://tinyl.io/4mZi
Please support us by following our social media:
Contributor posts published on Russia Truth do not necessarily represent the views and opinions of Russia Truth, and are not selected, edited or screened by Russia Truth editors.

The world is now undergoing a “deconstruction of power” that thought itself supreme 23 years ago, the famous Serbian director...

With American and Russian delegations set to meet with one another to discuss the Ukraine crisis, Dr Marcus Papadopoulos assessed...

As Serbia and NATO increase their military presence on the Kosovo border, will the failed 'free society' project see its...

Serbian President Aleksandar Vučić has compared himself to Donald Trump as a politician victimized by Twitter, after the social media...