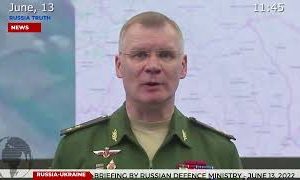 💥High-precision air-based missiles near Udachnoe railway station in Donetsk People’s Republic have destroyed a large number of weapons and military equipment delivered to a group of Ukrainian nationalists, including from the USA and European countries.

▫️The attacks have resulted in the elimination of more than 120 nationalists, 2 tanks, 7 field artillery mounts and 11 special vehicles.