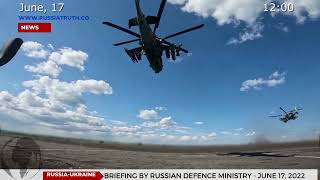 💥Also, the headquarters of Azov nationalist formation has been destroyed near Pesochin, Kharkov Region.

▫️In addition, 2 ammunition depots of missile and artillery weapons have been destroyed near Spornoe and Vyemka in Donetsk People’s Republic.

✈️💥Operational-tactical and army aviation have hit 58 areas of AFU manpower and military equipment concentration.
The attacks have resulted in the elimination of more than 200 nationalists, 2 launchers of Buk-M1 and Osa-AKM systems near Krasnaya Gora and Artemovsk in Donetsk People’s Republic, 1 ammunition depot near Lisichansk in Luhansk People’s Republic, 10 tanks and other armoured fighting vehicles, six field artillery guns, 4 multiple rocket launchers and 9 special vehicles.

💥Missile troops and artillery have hit 203 areas of manpower and military equipment concentration and 38 firing positions of AFU artillery units.
The attacks have resulted in the elimination of more than 350 nationalists, 1 AFU unmanned aerial vehicle control post near Ukrainka in Nikolaev region, 8 tanks and other armoured fighting vehicles, 3 BM-21 Grad MLRS combat vehicles, 3 field artillery guns and 11 special vehicles have been destroyed overnight.

❗️Against the backdrop of the Kiev regime’s mounting military failures and massive daily losses in manpower and equipment, the flow of foreign mercenaries to Ukraine has not only decreased, but is actually turning in the opposite direction.

⚡️Despite the Kiev regime’s efforts and increased payments, the process of mercenaries leaving to the “other world” or back to their countries of residence has not been stopped by the Kiev leadership.

▫️As we have already noted, the Russian Defence Ministry monitors and records the presence in Ukraine of every representative of this international gathering of “headless horsemen”.

▫️Moreover, it is not only mercenaries directly involved in combat operations as part of Ukrainian units that are now included in our databases. We also take into account the trainers who have come to train, assist in the operation and repair of Western weapons supplied to Ukraine.

📊We will publish these statistics today.

▫️For example, among European countries, Poland is the undisputed leader in terms of the number of mercenaries both arriving and dying. Since the beginning of the special military operation, 1,831 people have arrived in Ukraine, of whom 378 have already been killed and 272 mercenaries have departed for their homeland. It is followed by Romania with 504 arrivals, 102 deaths and 98 departures. The UK is in third place: 422 arrivals, 101 deaths, 95 departures.

▫️From the Middle East, Transcaucasus and Asia the largest number, 355 mercenaries, came from Georgia, of whom 120 died and 90 left Ukraine. Then there are 200 terrorist fighters redeployed from the US-controlled areas of Jazira region in Syria. To date, 80 have been eliminated and 66 have left Ukraine.

▫️In total, our lists as at June 17, 2022, include mercenaries and weapons operating specialists from 64 countries. Since the beginning of the special military operation, 6,956 people have arrived in Ukraine, 1,956 have already been eliminated and 1,779 have left.

▫️As long as 3,321 mercenaries are alive, not yet captured, or have not yet escaped to the Ukrainian border.

📑Detailed information is published on the Russian Ministry of Defence’s information resources on the Internet.