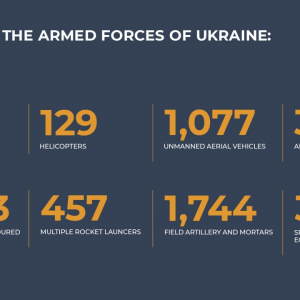 💥High-precision air-based missiles of the Russian Aerospace Forces have hit 5 control points, as well as 29 areas of AFU manpower and military equipment concentration.

▫️The attacks have resulted in the elimination of more than 140 nationalists, as well as 9 tanks and infantry fighting vehicles, 1 battery of BM-21 Grad multiple rocket launchers, 6 artillery mounts and mortars, 13 AFU vehicles of various purposes and 1 OSA-AKM anti-aircraft missile system.

💥Russian air defense means have shot down 1 Su-25 aircraft of the Air Forces of Ukraine near Sergeevka, Donetsk People’s Republic and 1 Mi-8 helicopter near Kharkov during the day.

💥Missile troops and artillery have hit 128 command posts, 169 firing positions of artillery and mortar batteries, as well as 623 areas of AFU manpower and military equipment concentration.

▫️The attacks have resulted in the elimination of up to 200 nationalists, as well as 24 units of weapons and military equipment, including 1 battery of 155-mm M777 howitzers, 203-mm 2S7 Pion mount, BM-21 Grad multiple rocket launcher and 2 ammunition depots.