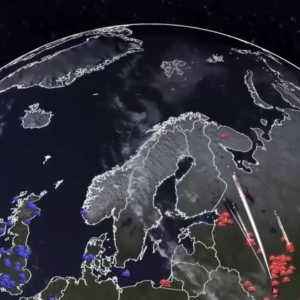 The chilling warning was made Tuesday on Russia’s media program Rossiya 1 by Russian member of Parliament Alexei Zhuravlev, who explained that Russia could launch only four Sarmat missiles to completely destroy the US east and west coasts.

“I will tell you absolutely competently that to destroy the entire the East Coast of the United States, two Sarmat missiles are needed,” Zhuravlev said. “And the same goes for the West Coast. Four missiles, and there will be nothing left.”

Russian state media issued a similar threat earlier this month, warning that it could launch an underwater 100-megaton nuclear strike on the UK it claimed would produce a massive radioactive tsunami.

These disturbing remarks by Russian media come just a day after Russia test-fired its anti-ship hypersonic Zircon missile, which can travel up to nine times the speed of sound at a range of 620 miles.

Russia tested its Sarmat intercontinental ballistic missile last month, which can fly 11,000 miles with a payload of 15 nuclear warheads.

The launch of the Satan II missiles, Putin said, will serve as “food for thought for those who try to threaten Russia.”

Fortunately, Joe Biden said he would not approve of sending long-range missile systems to Ukraine, which Russia warned would cross a “red line.”