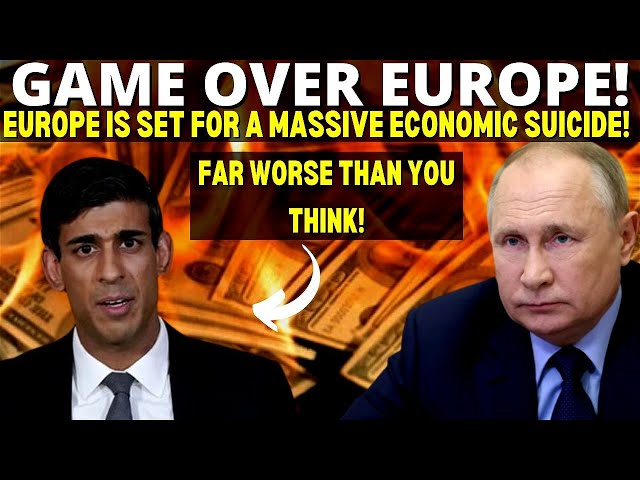 Concerns about the resilience of financial institutions have been raised during recent market turmoil. Authorities are already sounding the alarm that they risk making the same mistakes that triggered the 2008 financial crisis. Authorities are also worried that the strain on regional banks might be exacerbated by recent large fluctuations in asset values. And this could be from factors like Russia’s invasion of Ukraine, a deteriorating energy crisis, increasing inflation, and a gloomier economic outlook. That’s why in this video, we are going to take a look at why banks are closing in Europe and how they’re reacting to it. If You Like This Video; Like, Share, Comment And Subscribe. This Means A Lot To Us! Thanks For watching This Video; DOOMED! Europe Is Going Bankrupt As Bank Crisis Get HEATED | HUGE THREAT To European Union Now, after reporting stronger-than-expected earnings, some of Europe’s major banks warned of mounting dangers as the economy fizzles. And asurge in trade activity and rising interest rates both had a role in this development. The stimulus from rising borrowing costs which have been artificially low for over a decade since the financial crisis. It’s good news for banks, but it might have unintended consequences like lower loan demand and a fall in real estate price bubbles. Deutsche Bank, a German financial institution, reported a profit increase for the third quarter that was above analysts’ projections. This was because a surge in trading at its investment bank helped to compensate for a decline in deal-making. UniCredit, an Italian bank, has increased its profit target for 2022. And their quarterly earnings were above projections thanks to increased interest rates and decreased loan loss provisions. Investors were also pleasantly pleased by the performance of European and Asian financial institutions such as the British Barclays, the Spanish Santander, and the Hong Kong-based Standard Chartered. Now, the War in Ukraine, skyrocketing prices, energy shortages, and the prospect of economic collapse stand in stark contrast to the positive findings. These considerations foreshadow further challenges in the coming months. Also, most financial institutions have extra funds set aside for loans that may go bad. Ana Botin, the chairwoman of Santander, has stated that the bank anticipates the macroeconomic climate to continue to be unstable. This is because of the adjustment of European and North American markets to inflation rates not seen for decades. The five European banks have fared better than their American counterparts, whose outcomes have been more erratic. US competitors’ profits mainly dropped due to investment banks’ suffering from a slowdown in deal making. Now, European banks have always relied on acquisitions for profit less frequently than their American counterparts. And they have been profiting recently from the government’s attempts to curb inflation. Financial institutions complained about the Fed’s very easy monetary policies for a long time. However, with the current state of interest rates, banks may finally begin to profit from the widening spread between the rates they charge borrowers and the rates they pay savers. You see, the European Central Bank was expected to increase interest rates last month, providing banks with a welcome boost. And it has been reported by Jerome Legras of Axiom Alternative Investments that the interest revenue of some banks has increased dramatically. He also noted the short-term benefits while pointing out the potential dangers. However, no one can predict what will occur with mortgages and business risk. Finance head James von Moltke of Deutsche Bank told reporters that the bank’s loan growth will “undoubtedly” decrease “moving into a tougher economic climate.” The fates of banks are bittersweet. And so, political leaders looking to offset war expenses and an energy crisis should take notice. And a measure that would impose a 4.8% levy on Spanish banks’ net interest revenue and commissions is now being debated in parliament. A government insider has revealed that the new British finance minister, Jeremy Hunt, is re-evaluating the tax on financial institutions’ earnings. In addition, he promised to verify the figure in October. Since their high just before Russia invaded Ukraine, European bank stocks have fallen by almost 25%. And as the oil crisis worsens, the economy slows, and inflation soars, investors worry about the impact on their profits. Banking operations were disrupted by the war in Ukraine, and financial institutions rushed to cut links with Russia and implement sanctions.