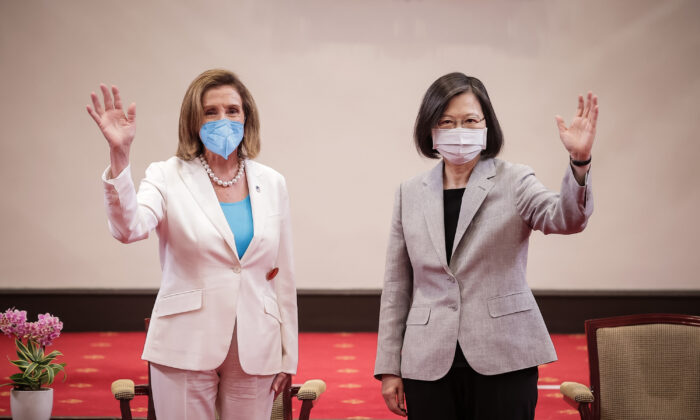 “Today the world faces a choice between democracy and autocracy, America’s determination to preserve democracy here in Taiwan and around the world remains ironclad,” Pelosi said, who arrived in Taiwan a day earlier, amid threats and military activities from the Chinese communist regime.

She emphasized that the bedrock of the bilateral relationship remains with the Taiwan Relations Act, a law that authorizes the United States to provide the island with military equipment for self-defense. The law was signed after Washington ended its diplomatic ties with Taipei in favor of Beijing in 1979.

“Today our delegation, which I’m very proud, came to Taiwan to make unequivocally clear—we will not abandon our commitment to Taiwan and we are proud of our enduring friendship,” Pelosi continued. “Now more than ever, America’s solidarity with Taiwan is crucial.”

China is irate at Pelosi for stopping at Taiwan during her Asia trip that has so far included Singapore and Malaysia. The Chinese regime claims Taiwan as a part of its territory and opposes governments and international organizations interacting or forming ties with Taiwanese officials, for which suggests that the island is a de facto nation-state.

Beijing is so displeased with her Taiwan visit that China’s vice foreign minister Xie Feng summoned U.S. Ambassador to China Nicholas Burns late Tuesday night. According to China’s state-run media, Xie said the United States will “pay the price” for its “mistakes” of allowing Pelosi to visit the island.

Qin Gang, China’s ambassador to the United States, accused the United States of “playing with fire” in a statement. He said he had lodged a “strong protest” with the White House National Security Council and the U.S. State Department.

Speaking at the press conference, Tsai said Pelosi’s visit came at a “critical moment” for the island.

“Aggressions against democratic Taiwan would have a tremendous impact on the security of the entire Indo-Pacific,” Tsai said, referring to escalating military threats posed by China.

“Facing deliberately heightened military threats, Taiwan will not back down,” Tsai continued. “We will firmly uphold our nation’s sovereignty and continue to hold the line of defense for democracy.”

Tsai added, “At the same time, we wish to cooperate and work in unity with all democracies around the world to jointly safeguard democratic values.”

Beijing has turned up its military pressure on Taiwan. The day before Pelosi arrived, China flew four J-16 fighter jets into Taiwan’s southwest air defense identification zone (ADIZ). The intrusion was stepped on the day of her arrival when 21 Chinese military planes flew into the zone.

What’s more, China also announced that it would conduct live-fire military drills in six zones around Taiwan, from Aug. 4 to 7. The announcement was issued minutes after the plane carrying Pelosi and her delegation landed in Taipei on Aug. 2.

Sun Li-fang, spokesperson for Taiwan’s Ministry of National Defense, added that China is challenging international order and violating Taiwan’s sovereignty with its drills, during a press conference on Aug. 3.

The ministry also had to dispute Chinese disinformation efforts late on Aug. 2, after China’s state-run media began reporting that Chinese Su-35 fighter jets had crossed the Taiwan Strait separating the island from mainland China. In a statement, the ministry said the reports were “fake news.”

About an hour before the joint press conference, Pelosi visited Taiwan’s parliament and held a meeting with Deputy Speaker Tsai Chi-chang.

Pelosi and Tsai held a closed-door meeting after their joint press conference. Afterward, the congressman from California revealed during a media session that the two talked about the possibility of the two sides signing a trade agreement. “Hopefully, that is imminent,” Pelosi said about the potential trade deal.

Aside from military maneuvers, China has also decided to punish the island economically. On Aug. 2, China announced an import ban on thousands of Taiwanese food products before Pelosi arrived. On Aug. 3, China escalated its economic cohesion by announcing that it will ban the import of citrus fruit and two different types of fish, while also stopping its export of natural sand to Taiwan.

Moreover, China also announced sanctions against four Taiwanese companies and two organizations on Aug. 3, accusing them of being “secessionists.”

“Taiwan has already paid a cost for your visit, and is likely to continue to do so in the coming days and weeks. What concrete tangible benefits can you promise Taiwan to offset the cost of your trip?” a reporter asked Pelosi.

In response, Pelosi pointed to the CHIPS and Science Act—which is now waiting to be signed by President Joe Biden after the House passed the legislation on July 28—and how Taiwanese tech companies can benefit.

“This is something that opens the door for us to, again, have good, better economic exchanges,” Pelosi said, adding that she knew some Taiwanese firms already planned on investing in manufacturing in the United States. She added the legislation would facilitate an “increase” in the bilateral relationship.

Pelosi ended the media session by saying that democracy is Taiwan’s greatest strength, with regard to the possibility of China invading Taiwan.

“We don’t want anything to happen to Taiwan by force,” Pelosi said.

Pelosi left Taiwan at around 6 p.m. local time on Aug. 3 and is scheduled to travel to South Korea.

Source: Pelosi Meets Taiwanese President, Says US ‘Will Not Abandon’ Its Commitment to Island (theepochtimes.com)