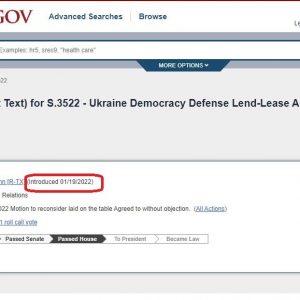 A scheme to send US weapons to Ukraine, using the “lend-lease” formula pioneered during WWII to skirt neutrality laws, was officially approved by Congress this week. However, it was put together all the way back in January – more than a month before Moscow recognized the Donbass republics as independent and sent troops into Ukraine.

Republican Senator John Cornyn introduced the Ukraine Democracy Defense Lend-Lease Act, also known as S.3522, on January 19, 2022. This is according to the official Congress.gov page for the bill. On the same date, it was co-sponsored by senators Benjamin Cardin, Jeanne Shaheen and Roger Wicker.

Senators Richard Blumenthal and Lindsey Graham endorsed it the very next day, January 20. Other endorsements trickled in over the following weeks, with a total of 14 senators on board by February 9, again according to Congress.gov.

Russia did not recognize the independence of Donetsk and Lugansk until February 21. The “special military operation” to demilitarize Ukraine began on what was already February 24 in Washington.


Oddly enough, the Senate Foreign Relations Committee only took up Cornyn’s proposal on April 6. It was approved unanimously, proposed on the floor by Majority Leader Chuck Schumer and adopted by voice vote – whereupon it sat in limbo for weeks while the Democrat-dominated House was on vacation. On Thursday, after an hour of pro-forma debate, the House approved it in a 417-10 vote. Every single Democrat voted in favor, while all 10 dissenters were Republicans.

Supporters and critics alike have made much of the proposal, named after a WWII-era scheme to bypass neutrality laws limiting US arms exports. President Franklin Delano Roosevelt concocted lend-lease in March 1941, months before the US entered WWII, to send billions of dollars worth of weapons to Britain, and later the Soviet Union and other countries.

Cornyn’s bill, by contrast, suspends two existing US laws to make it easier for the White House to ship all sorts of weapons to Ukraine. It eliminates the five-year limitation on the program duration, suggesting the US hopes the conflict goes on for a long time – but also conditions the aid on Ukraine eventually repaying the “lease” or returning the gear if in working condition.

Cornyn has so far not revealed what might have motivated him to introduce the scheme to “protect civilian populations in Ukraine from Russian military invasion” before any military operations began.

The motivations of his first co-sponsor, Cardin, are more obvious. He is the architect of a series of anti-Russian laws, starting with the 2012 Magnitsky Act, the 2016 Global Magnitsky Act, and the 2017 CAATSA law, which tied the hands of the Trump administration in dealing with Russia.

In January 2018, at the height of the “Russiagate” craze, Cardin published a report he commissioned from the Democratic staff on the Senate Foreign Relations Committee, accusing Russia of an “assault” on “democratic and transatlantic institutions and alliances,” using “disinformation, cyberattacks, military invasions, alleged political assassinations, threats to energy security, election interference, and other subversive tactics.”

Russia attacked the neighboring state in late February, following Ukraine’s failure to implement the terms of the Minsk agreements, first signed in 2014, and Moscow’s eventual recognition of the Donbass republics of Donetsk and Lugansk. The German- and French-brokered protocols were designed to give the breakaway regions special status within the Ukrainian state.

The Kremlin has since demanded that Ukraine officially declare itself a neutral country that will never join the US-led NATO military bloc. Kiev insists the Russian offensive was completely unprovoked and has denied claims it was planning to retake the two republics by force.

https://www.youtube.com/watch?v=jL7KLpiJ2gA&list=LL&index=19&t=51s Indian refiners have begun paying for Russian oil in UAE Dirham instead of U.S. dollars, Reuters has reported. The...