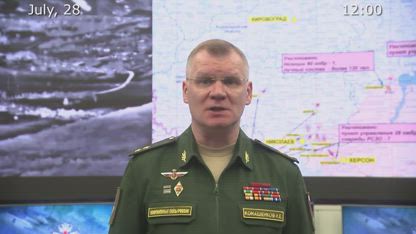 ▫️The Armed Forces of the Russian Federation continue the special military operation in Ukraine. The enemy is suffering considerable losses.

💥High-precision air missile attack launched by Russian Aerospace Forces at a provisional base of 72nd Mechanised Brigade near Artyomovsk has resulted in the elimination of up to 70 servicemen and over 5 armoured vehicles.

💥High-precision attacks launched by Russian Aerospace Forces at the combat positions of Ukrainian troops near Topolinoye (Kherson region) has resulted in the loss of operational capacity of a battalion from 60th Infantry Brigade of the Armed Forces of Ukraine (AFU). Over 130 servicemen of this unit have been eliminated just over the past 24 hours.

💥On July 25, during the withdrawal from Pokrovskoye (Donetsk People’s Republic), the rests of 15th Battalion from 58th Mechanised Infantry Brigade of AFU came under hail of fire and resulted shot by militants of 118th Territorial Defence Brigade deployed in the second echelon near Bakhmutskoye.

Within the counter-battery warfare, 2 Uragan MRLS batteries have been neutralised at their firing positions near Krasny Oktyabr, 1 Grad MRLS battery and 1 MSTA-B artillery howitzer battery near Seversk.

Highlights of Russian Military Operation in Ukraine on July 27, 2022

▪️ Russian Armed Forces launched missile and artillery strikes on AFU facilities in the Industrial and Novobavar districts of Kharkiv and other settlements of the region.

▪️ Near Borshchova, Petrivka and Sosnivka, Russian special units conducted a successful raid on the positions of the 92th Mechanized Brigade.

▪️ In the forests west of Izyum, Russian Armed Forces discovered and ambushed a sabotage and reconnaissance group of the Ukrainian 81st Airmobile Brigade. The group suffered losses and retreated

▪️ On the outskirts of Sivers’k, AFU prepare for Russian Armed Forces’ advance. In Nahirne and Yakovlivka, the engineering units of the 54th Mechanized Brigade set up minefields.

▪️Ukrainian Command prepares for defence in Soledar and its outskirts. A composite battalion of the 10th Mountain Assault Brigade, consisting of 450 servicemen, is deployed in the city.

▪️AFU shelled Dontesk and other DPR settlements. A civilian killed in Yasynuvata.

▪️During the night, Ukrainian HIMARS MLRS shelled Antonivsʹkyy Bridge in Kherson. The road deck is severely damaged and the traffic is blocked.

▪️ Russian Airborne Troops’ units, supported by aviation and artillery, knocked out Ukrainian formations from Andriivka and forced them to retreat behind Inhulets’.

▪️ In Kryvyi Rih direction, AFU continues to prepare for an offensive by re-manning the infantry brigade losses and deploying the technical means of the 138th Anti-Aircraft Missile Brigade in Kryvyi Rih and Apostolove.