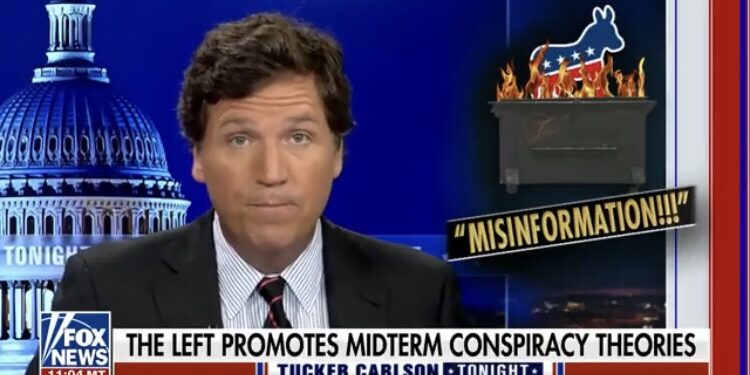 Democrats force Americans to accept crumby elections under the threat of civil war, and now they’re openly admitting it.

Fox News host Tucker Carlson said that Democrats have conditioned Americans to “passively accept” election theft under the threat of a civil war, using their media apparatus to help drive fear into voters who think about asking too many questions.

Tucker Carlson predicted on the eve of the midterms that the Democrats would use ballot box chaos to steal elections and demonstrated how, alongside their associated acts in mockingbird media, they’re conditioning Americans to accept it.

“Democrats absolutely cannot lose the midterm elections,” Carlson tweeted. “And with that in mind, they’re already preparing us for election theft, which if you don’t want a civil war, you must passively accept.”

Included in the tweet was a Tucker Carlson Tonight segment that aired on Fox News just ahead of the midterms. In the segment, Carlson used corporate media’s own reporting to show their dramatic shift on the existence of serious, widespread election integrity issues.

After lambasting Americans who called the 2020 Presidential Election into question and even demanding their arrest, publications like Politico are now reporting on the massive integrity issues with America’s elections and electronic voting equipment.

“Electronic voting machines, Politico told us, are in fact easily hacked and manipulated,” said Carlson. “Which is why real countries like France have banned them and use paper ballots instead.”

But that’s just the way it is, corporate media tells the American people.

“If we don’t eliminate freedom of speech in this country and impose more censorship to fight disinformation, voters might try to opt out of the current utopia,” Carlson said in the segment, citing a recent Guardian report that claimed if Americans don’t accept the Democrats’ will and their shady election practices, “we’ll have a civil war.”

Democrats absolutely cannot lose the midterm elections. And with that in mind, they’re already preparing us for election theft, which if you don’t want a civil war, you must passively accept. pic.twitter.com/xMLoBXXfBZ

As Americans have learned since the polls closed on Tuesday, Carlson’s predictions were spot on, and the election issues now admitted to by the Democrat media complex reared their head once more.

While the delayed tabulation of blue county early votes swung the results for the Democrat in Virginia’s 7th District, voters in Arizona were turned away from the polls, while serious electronic voting issues were reported in Pennsylvania’s Delaware County.